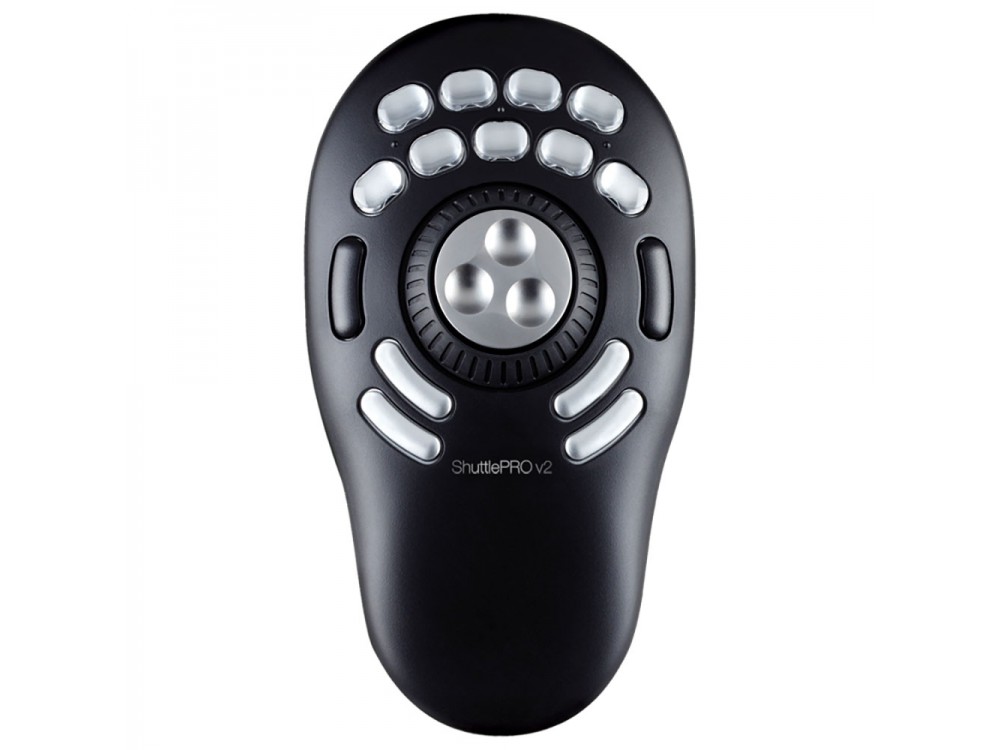 Your workflow, re-imagined!
Contour ShuttlePRO v2 is the perfect productivity accessory for video, audio or photo editing applications on PC or Mac. Working alongside your mouse and keyboard, ShuttlePRO v2 is designed to minimise keyboard confusion and improve workflow with its innovative design and intuitive range of controls.

Take control of your multimedia work. Single-handedly!
The ShuttlePRO v2 multi-media controller will maximise your audio and video editing, graphic design, or other shuttle and jog productivity with both ideal form and function. Pre-configured for many of the industry's leading audio and video editing applications, 15 customisable buttons will make working amazingly fast and precise by utilising commonly used macros.

Features Jog/Shuttle Wheel
Attempting to scan your software timeline is a clumsy process when you're relying on a conventional mouse and keyboard. ShuttlePRO v2's spring loaded jog shuttle wheel allows multi-speed scanning both forwards and backwards along your timeline.

ShuttlePRO comes with Programmable Buttons
Using ShuttlePRO v2's 15 programmable buttons you can now apply your most regularly used shortcuts or macros, so that they are always on hand when you need them, allowing increased productivity.

AppDetection
ShuttlePRO v2 will detect the application that you are using and will switch configuration automatically, a real bonus if you're using multiple apps in a single project.

Pre-Configured Settings
Ease of use is key to ShuttlePRO v2, and to help you get started, the supporting software for Mac & PC includes pre-configured setup for over a 100 popular creative editing applications.

Customisable
Use our included settings as a template and customise them to your liking.